Born from the heart of Volcanoes, the greatest warrior species has emerged for Loremaster's to utilize in their Reborn in Power campaigns as a possible threat posed against the might of their Chosen!

In this entry you will learn about the mythos of these terrifying foes and have the opportunity to gain access to the Arendite stat-blocks for a limited time! Now, let's dive in!

In the Realm of Votonic, around 1.4 billion cycles PCR, two deities who were once known as brothers in the Ancient Votonist society lived separated due to the Great Divide. The two were known as Alpha & Omega, being a rivalry so powerful that they shook the very heavens that the great God Caun created.

Alpha found himself in a galaxy known as Sow'mun where he came across a Prime colony on a world called Melandre. There Alpha was revered as a deity by the Prime and then fell in love with a Lady Kortizia Mulain. The two had 6 children that eventually became the Gods of Sow'mun, formally known as the Alpha (Mulain) Pantheon.

Omega on the other hand established himself as a mysterious deity in the galaxy neighboring Sow'mun, known as Lazz'emino. Instead being apart of the Prime colony he watched over, he decided to shape the primitive society into powerful warriors. Therefore, Omega took the Prime and placed them onto a world of ferocious beasts, telling them that if they are able to survive, they would be worthy to live with him on his home world he titled as Drem. This taught the Prime the value of worship and loyalty to their divine deity.

Although the two brothers were separated, they still could feel each others presence. Alpha knew that his brother was building an army and felt it necessary to begin his plans as well. Therefore, he gathered his 6 children and told them that they had an enemy that would one day threaten their entire existence. Explaining to them the power of Omega, but not once revealing the very nature that they are related.

One of the children named Arniik, felt obligated to help his father defeat the enemy so that he may be the most trusted of his siblings. Therefore, he left Sow'mun to find Omega and destroy him. With his ability to corrupt the minds of others, Arniik felt he was the proper candidate for this.

However, when he finally found Omega and gained control over his mind, he found out the truth. That his father lied to him and his siblings. That Omega was actually just his uncle. This enraged Arniik to a point where his own psyche began corrupting itself until he went insane.

It was at this moment the God of Corruption was born and his first mission was to get back at the rivalry that caused his transformation in the first place. Arniik went back to Sow'mun with Omega as his captive. Sent Omega out to subdue his father, and when he was successful, Arniik corrupted his own father.

As a sentiment toward their rivalry, Arniik decided to forge the universes greatest warriors using the blood of his father & uncle. He brought them to the world of Melandre without anyone knowing, chained them inside the largest volcano while it was active, and slit Alpha & Omega's appendages as the bled out into the molten lava.

Arniik then called his other siblings and showed them what he had done. They were frightened and told him that he was going mad. Though he knew what their reaction might be it obviously did not bode well with him. With a sharp turn of events, the God of Corruption brought all his siblings under his control. Then used all of their powers to create a new species, the warrior race his father & uncle always wanted. The Arendites!

For an Arendite to be born, another of its kind must bleed into the core of a volcano. Arendites are born this way very rapidly, with 10 to 20 emerging after only a week. Once emerged, the Arendites follow their father as the Apex, that is until their father is no longer worthy to hold claim to their title.

Being made from molten lava, all Arendites are able to absorb fire & lava to heal themselves back up.

Their main drive is to find volcanoes, mate with them (yes, Arendites believe volcanoes to be their partners for life), and eventually conquer the entire planet to turn it into a volcanic wasteland. All this so that they may thrive.

Therefore, those civilizations that know of the Arendite threat tend to be extremely weary of Asteroid & Meteor Strikes.

Be sure to take note of this if you are the Loremaster of the party.

As you read the following Scans, you'll find three types of Arendites; Warriors, Adversaries, & Apex Arendites. Warriors are the most common of Arendite your Chosen may come across. They tend to roam around in packs of 10 as they search for volcanic activity. Adversaries are usually leading Warrior packs, and once they find a mate, they eventually become the new Apex. 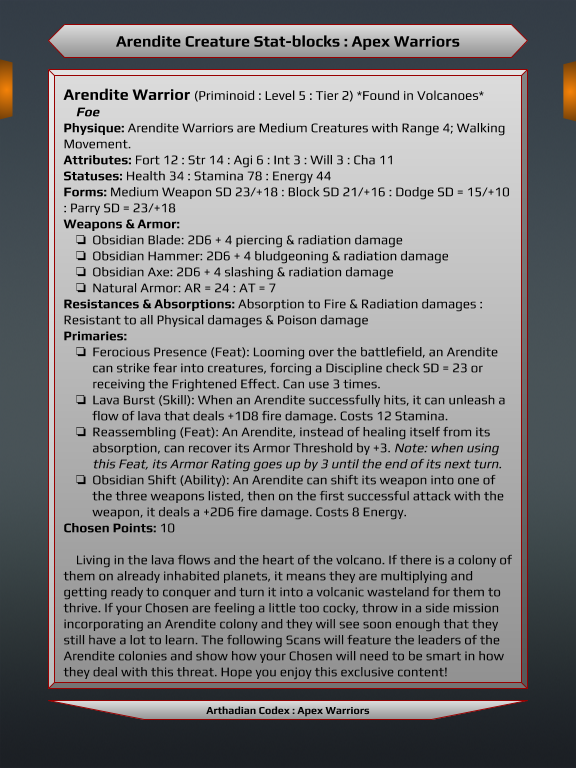 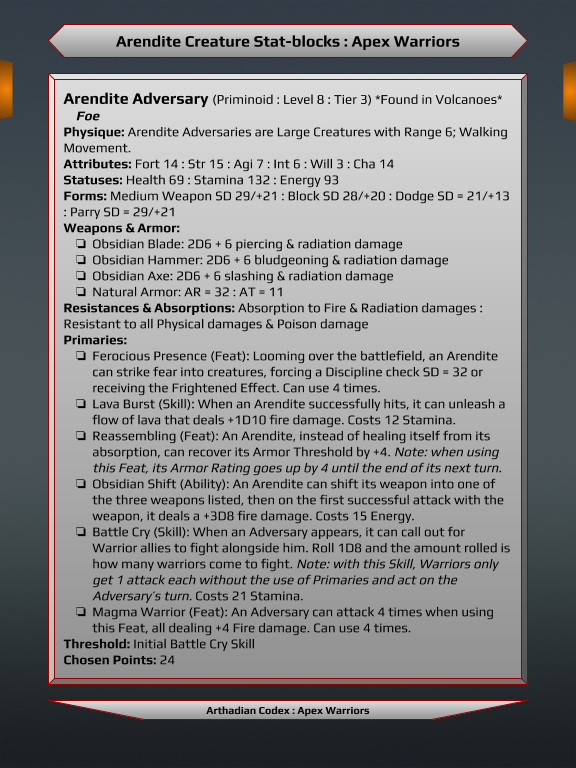 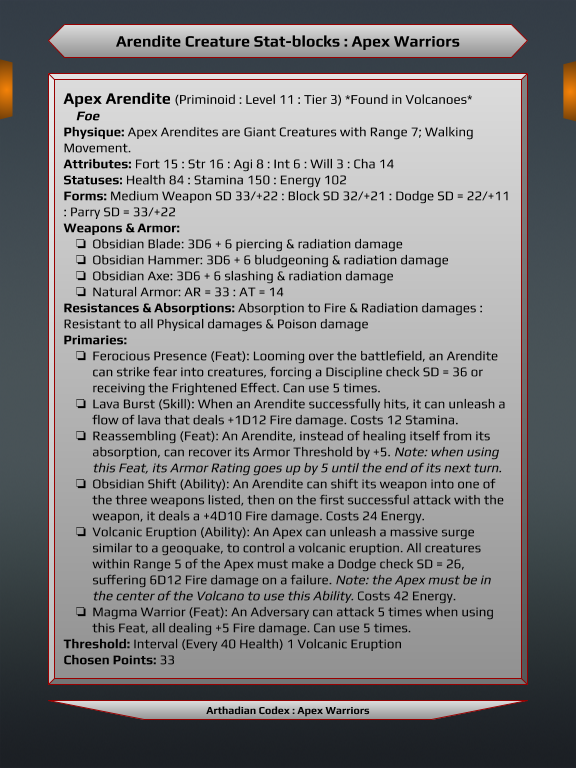 With this entry completed, you have enough knowledge to throw some Arendites at your Chosen for added pleasure on your part. If you enjoy what you are reading, feel free to like and share this entry as well as donate to the Reborn in Power SubscribeStar!

If you donate you will gain access to this content and much more as they are created. Remember, the stat-blocks here will only be up for a limited time! Thank you, be safe, and if death comes to you, may you be reborn in power...

The CORE Pillars: At their current state