For one to know the Arthadian Anthology, they must first begin at the 'literal' core of it all, the Conglomerate of Regal Entities. In these 7 realms, existence falls under a strict law that symbolizes an individuals path through life. This law is known as the Rebirth Process or Chosen Phenomena.

What this means is that an individual on a path towards power is influenced by a being of higher power, guiding them toward their eventual death, and once this is complete the individual or 'Chosen' must pass the trial that awaits them on the other side. Once it is passed, they are reborn in power.

Very few make it this far as only the faithful experience this phenomena, however it doesn't mean that there are not powerful beings sprinkled throughout the realms. In fact, the mythos behind the realms is a story about 7 multiversal entities converging with each other to put an end to a Great Reckoning.

This time is referred to as such and predates the CORE Realms, therefore, you will find many instances regarding this reckoning labeled as Predating CORE Realms (PCR).

Now the CORE is past 16 thousand cycles of existence, a cycle being equivalent to 720 days on earth, so it has existed for longer than humanity has. However, this does not mean the realms themselves only emerged then, each realm has existed for countless eras. But those are stories for future entries. Right now, let's focus on the lead up to convergence...

The following excerpt has been translated from an ancient codex entry once thought lost, which describes the events that took place during this time:

"....War is a nasty thing... Causing great uncertainty the more advanced and powerful a civilization becomes. But what happens when beings on the level of gods go to war? This may seem like a far-fetched concept, but if you were to ask me if an interstellar cult could take control over entire empires I would need to know one thing, who or what do they worship?

As a primitive society, our base understanding of a god is formed from our own naivety. With no knowledge of how reality operates, we must place meaning unto an all powerful deity that controls it all. But just as the cells in your body work to keep you alive with no questioning as to why it does this, the universe has a similar system that all operate under.

However, this does not mean there are no 'gods'. On the contrary, beings of great power do exist as they have lived for much longer than we can fathom and were able to ascend to greater heights. Therefore, I ask again, who or what do they worship?

This Cult of the Reckoning has chanted for the destruction of power as they believe anyone that achieves this will eventually become corrupt themselves. That there is no being that can wield such greatness, live for eons, and not become corrupt. However, you witness this on a daily basis. There is more than one way to achieve power, not all being through nefarious means, the cult does not seem to recognize this. In fact, I would say they are severely hypocritical in this regard due to their own devotion toward a past belief.

This belief comes from the Legend of Raygos. In the legend, a man died a noble death and was reborn as a Guardian of Votonic, seen as a great responsibility as guardians serve the many fragments of the Votonic realm. As wise elders and sages of the past explain, each Guardian has a legend behind them, and Raygos' legend is one of great turmoil. He felt as though he was cursed to live a life he did not want to live, that he was forced into guardianship. Given a power he did not want, and live a new life after dying that was not his decision.

Why this is important is his guardianship ended due to his betrayal or as he put it, their retribution. It was not until the Assault of The Harborer that it became clear the cult worship Raygos, as he believes power given is what causes Guardians to be necessary in the first place. Therefore, a cult arrives to put an end to all those in power, including the gods, as retribution for Raygos.

However, I write from the perspective of a Votonic Sage, one that still believes to become a guardian is a great responsibility, more so now than ever before. Perhaps this turn of events may cause the Supreme Guardian to change their selection process. Or perhaps this will bring on a massive change in an overall expanse of the universe? It seems as though there are realms converging toward Votonic and the future course of reality is shifting away from Votonic and towards a larger effort.

In the end, the final reckoning has arrived with thousands of executions being committed in the name of Raygos. However, an energy source so massive is honing in and will eventually drive this cult out of our realm, as they too must be relieved of their power..."

After Grand Sage Illumin wrote this work, the findings he presented in his research came to fruition in a spectacular way. Six other realms converged onto Votonic from the Planar Unity and merged their essences which eventually brought on a new order, Rune Forgers, that wiped the cult out of the realms.

This brought about the Age of Convergence that is now referred to as the first Array in a CORE Cycle, with the Array calendar being named after Illumin, the Agerosh Illumin. 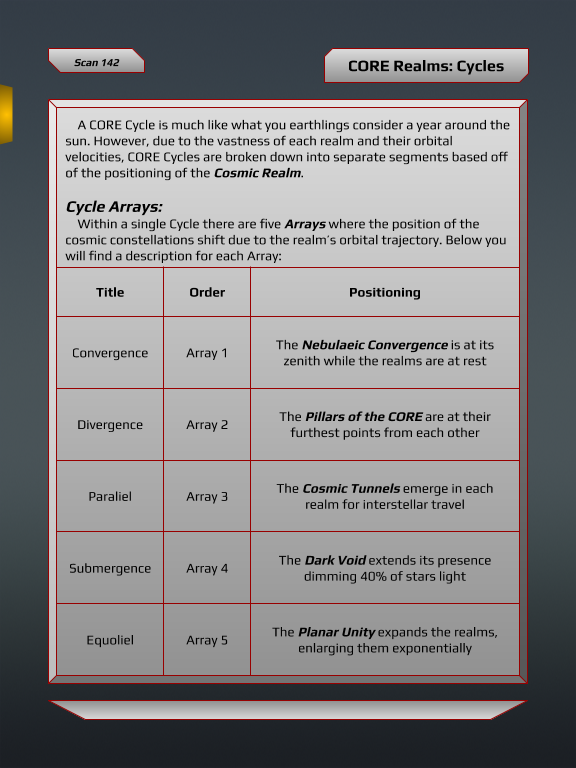 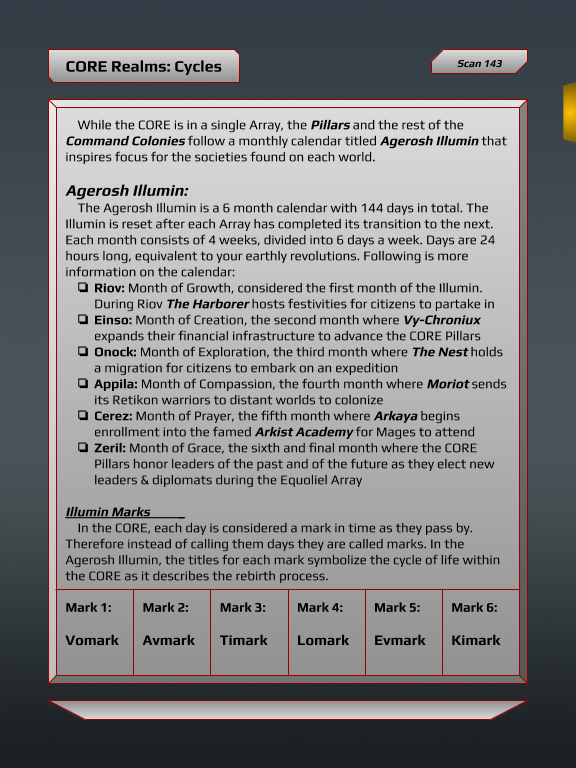 In the end, there is so much more I could go over but I will save that for another entry. Until then, be safe, stay safe, and if death comes to you, may you be reborn in power...